At least 11 people have been killed and 40 injured in a bombing attack in the city of Jolo in the Philippines while soldiers were helping with Covid-19 relief efforts. One of the attacks involved a female suicide bomber.

The first explosion occurred inside the Paradise Food plaza next to a computer shop in downtown Jolo at around 12.00am local time, killing five soldiers and five civilians, local media reported, citing the military.

About an hour later a female suicide bomber blew herself up outside the Cathedral of Our Lady of Mount Carmel nearby, Vinluan said. The second explosion killed one soldier.

Photos from the scene show charred bodied lying on the street and rescuers treating the wounded.

Photos from the second explosion in Brgy. Walled City in Jolo, Sulu

The second blast happened at around 1 p.m. as authorities were sweeping the area following the first explosion. (via @News5PH / @lailachikadora) pic.twitter.com/gpXJVtmpLR

They also show soldiers deployed at the scene and a damaged army truck.

The explosions happened at the Barangay Walled City, particularly inside the Paradise Food Shop beside SYNTAX computer shop in Jolo, Sulu. pic.twitter.com/d6enCCRk5f

Unconfirmed reports of a bombing incident in Jolo today. If confirmed, I’d like to remind everyone that the intelligence officers of the AFP who were murdered by the PNP in early July were tracking terrorist bombers. pic.twitter.com/wcaFVHufqQ

No one has claimed the responsibility for the attack, but the southern Sulu Archipelago is a stronghold of the ISIS-linked Islamist insurgent group Abu Sayyaf. The group bombed the Cathedral of Our Lady of Mount Carmel last year, killing 20 people. 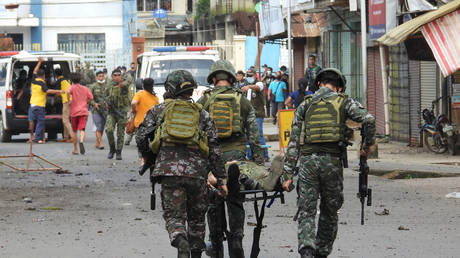