The Prime Minister of Slovenia has written to European Union leaders to voice his objections to draft proposals that would allow Brussels to cut funding to member states considered a threat to the rule of law in their country.

Slovenian Prime Minister Janez Janša sent a letter to European leaders on Tuesday in which he announced his opposition to plans that would make access to funding conditional in the next EU budget.

The budget, which runs from 2021 to 2027, was vetoed on Monday by Hungary and Poland, plunging the 27-nation bloc into a political crisis.

Janša called for a return to the agreement made at the EU summit in July, which was subsequently amended by the rule-of-law criteria.

Only with the swift completion of what we started in July will we be able to meet high expectations and pave the way for a stronger Europe in the post-pandemic period.

In his letter addressed to European Commission President Ursula von der Leyen and European Council President Charles Michel, the PM said Slovenia could not accept the use of “discretionary mechanisms” to discipline nations that do not abide by the EU’s “politically motivated criteria.”

Those of us who have spent part of our lives under totalitarian regimes know that deviation from reality begins when processes or institutions are given names that mean the exact opposite of their essence.

In the letter, which ran to almost four pages, Janša slammed the EU for double standards. He claimed that, in 2014 the EU institutions had not responded with a single warning when Slovenia “witnessed stolen elections with the help of drastic abuse of state institutions.”

Slovenia’s opposition leaders have distanced themselves from the letter.

The president of the Christian Democrat New Slovenia party and Minister of Defense Matej Tonin said the letter represents the opinion of the prime minister and not the entire government.

The acting leader of the Democratic Party of Pensioners of Slovenia and Minister of Health Tomaž Gantar claimed that the PM’s letter “puts us among the problematic countries we have never belonged to” at a time when Europe needs to be unified to tackle the health crisis.

Last week, Hungarian Prime Minister, Viktor Orban also compared the EU’s draft proposal to an approach that might have been taken by the Soviet Union, and slammed the EU’s attempt to punish its member states for not adhering to its own politically motivated criteria.

As a result of the veto by Hungary and Poland, as well as Slovenia’s open opposition, the contents of the next EU budget remain in doubt. In its current state, it includes a total package of €1.8 trillion of funding, which will be the largest ever financed through the EU budget as Europe looks to rebuild after the Covid-19 crisis. 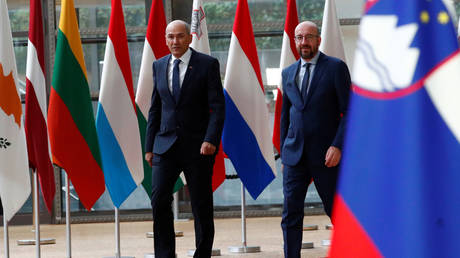 People who have had coronavirus mu...