Tens of thousands of ammunition rounds have vanished from German military arsenals since 2010. The revelation comes amid reports that a violent far-right underground faction has taken root in the army’s elite commando unit.

More than 60,000 live cartridges of “varying calibers” have disappeared during the past 10 years, Die Welt reported on Friday, citing the government’s confidential response to requests filed by German lawmakers.

The total number of rounds unaccounted for is actually far bigger and stands at roughly 96,000 – of which only 36,000 were subsequently found, the newspaper said. In over 100 cases, both police and the military itself failed to establish where the ammunition could have ended up.

There are fears, however, that a “militant right-wing network” could have developed under the radar of security authorities and spread in the ranks.

The figures given for the missing ammunition are only an “approximation” as there is no nationwide record of weapons and ammunition losses in Germany. For instance, the ammunition bookkeeping at KSK – the army’s secretive special forces unit comparable to the British SAS or the American Green Berets – was all but “sloppy,” the paper said.

The German Defense Ministry has pledged to hold a thorough inquiry into the lost ammunition. “Sloppiness will be stopped, every case of diversion will be reported and the public prosecutor’s office will be called in,” a military spokesperson told DPA news agency.

The elite KSK fighting force itself has previously made headlines, although its operators prefer to keep it away from the public eye. Some members, both retired and active-duty, are currently being probed by the military intelligence agency, the MAD, for their alleged membership in a far-right underground group within the unit.

In May, detectives uncovered a large cache of Nazi regalia and a trove of stolen weapons, ammunition, and explosives at the property of a 45-year-old sergeant major who joined the KSK back in 2001. Most of the firearms were military issue, while the explosives were similar to the ones used by KSK teams.

The man’s own company came under fire for staging a notorious party three years ago, where soldiers reportedly listened to neo-Nazi rock music and flashed Hitler salutes. As the row grew, Defense Minister Annegret Kramp-Karrenbauer, announced that one of four KSK fighting companies – tainted by the extremist links – would be dissolved.

Other less elite units were also plagued by far-right scandals back in 2017, when Nazi memorabilia, uniforms, and awards were found on display at military barracks across the country. 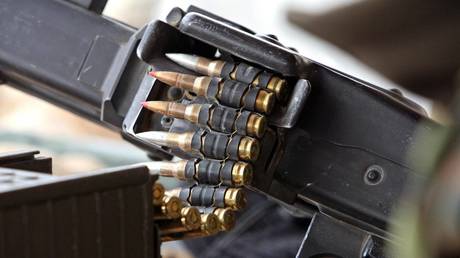