Activists protesting the coronavirus lockdown have organized another ‘silent march’ in Berlin, angering the locals and provoking counter-demonstrations. Police made arrests as they dispersed a blockade on the path of the marchers.

The organizers of the event insist that the “campaign of fear” launched by the government over the Covid-19 pandemic is infringing on their rights and must end. They are aiming for their protest to be as civilized as possible, with participants asked to wear face masks, abide by social distancing rules, and refrain from chanting any political slogans.

Some 5,000 signed up for the event, but the actual attendance was far lower. The column was made up of around 400 coronavirus skeptics when the march began, according to estimates by local media. As such, the police deployed on site actually surpassed the protesters in numbers at that point.

Those in the front row of the march carried a banner bearing the slogan of the movement, reading: “We must talk.” As the procession went on, it was joined by more people. But there was also a counter-protest, as dozens came to show their rejection of the agenda promoted by coronavirus skeptics. “Shame on you!” read one of their banners.

Locals were also unhappy with the event, with people in the windows whistling and banging on pots, making sure the protest would not be silent like the organizers planned. Drivers honked their horns.

A group of counter-protesters also tried to block the route of the march. A dozen young men in black clothes with their faces covered sat on the pavement, locking their hands tight. But the police interfered and dispersed the blockade. The officers acted harshly as they separated people from the group, shoving them and making arrests.

Rallies of Covid-19 skeptics in Germany often end up in violence as they face resistance from counter-protesters, many of whom represent Antifa and right-wing groups.

A large demonstration took place in Berlin midweek, after lawmakers passed a bill amending the existing infection protection law. The people insisted that the legislation gave the government too much control over their lives, as it obtained more powers to impose various restrictions. Police deployed water cannons as thousands of protesters refused to leave.

On Saturday, a major protest of the ‘Lateral Thinking’ movement, which insists that the coronavirus is a hoax, was cancelled in Leipzig in the last minute, but there were still clashes between rivaling demonstrators and police.

As the second wave of the pandemic began to overwhelm the German health system, the country introduced a new partial lockdown in early November. Restaurants, bars, cinemas, and gyms closed down for a month, while gatherings were restricted to no more than 10 people. But Chancellor Angela Merkel insists that more curbs are required to stem the spread of the disease, which has already infected almost 928,000 people in Germany and killed over 14,000. 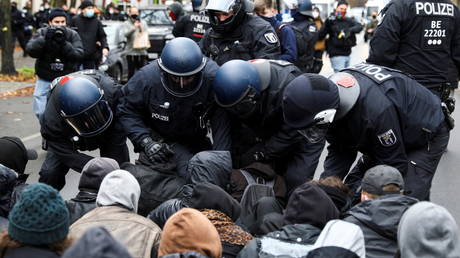 China to launch rocket to the Moon...