An international team of scientists led by Dominique Segura-Cox at the Max Planck Institute for Extraterrestrial Physics (MPE) used the Atacama Large Millimeter/submillimeter Array in Chile to study a protostar, located 470 light-years away in a stellar nursery known as the Rho Ophiuchi region.

The burgeoning star, which is called IRS 63, is a class I star, or less than half-a-million years old. The researchers found suspicious gaps in the star’s disc which led them to believe that protoplanets may already be forming in the dust cloud all around it.

“Even in the most conservative case… these features are indications of dust beginning to accumulate at particular radii in the disc. It is probable that the structure of the disc has an effect on planet evolution starting early in the star-formation process,” the researchers wrote.

The leading model to explain planetary formation is a kind of cosmic snowball (or dustball, more accurately) – grains of dust slowly begin accumulating together before gravity eventually brings in more and more material as the body orbits around a star or protostar, as the case may be.

This leads to gaps in the protostellar disc which we can and have observed, but only in older stars. Astronomers have witnessed more than 35 class II star systems of about one million years in age, but they had all lost their dust clouds by the time they were spotted.

“The size of the disk is very similar to our own solar system,” Segura-Cox explains. “Even the mass of the proto-star is just a little less than our Sun’s. Studying such young planet-forming disks around proto-stars can give us important insights into our own origins.”

If verified, the new discovery suggests that planets may form 500,000 years earlier than previously thought within the overall lifespan of a star system.

Given the possible protostar’s close proximity to our planet and young age, it will be a fantastic resource for scientists here on Earth to study planet formation as it happens. 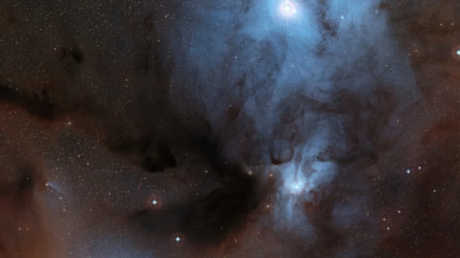