Quibi, the short-form streaming platform billed as the next big thing in online media, lost a whopping 92 percent of users who signed up for a free three-month trial, according to newly released data.

The platform – which takes its name from its primary offering of ‘quick’ and ‘bite-sized’ short-form videos – launched in April this year and was heralded by many as the next stage in streaming.

Data collected by analytics firm Sensor Tower, however, estimates that only eight percent of users who signed up in the first three days stuck around on the platform once the trial period ended last week. That translates to a measly 72,000 subscribers out of the 910,000 who signed up.

Luckily for Quibi, that’s not the grand total of users on the platform. Quibi says more than 5.6 million people have downloaded the app altogether since April, but it has not disclosed exactly how many subscribers it has.

Created by Disney and DreamWorks alumni Jeffrey Katzenberg and led by CEO Meg Whitman, formerly of Hewlett Packard Enterprise, the new platform offered a plethora of projects featuring A-list actors from the get-go.

The star-studded lineup of shows – all of which are ten minutes long or under – includes content from Hollywood heavyweights like Steven Spielberg and Guillermo del Toro, as well as Chance the Rapper and Idris Elba. Shows range from drama and reality to comedy and tragedy, much like any other streaming service.

One of Quibi’s supposed selling points, however, was the fact that it was designed to work in both landscape and portrait modes, allowing users to hold their phones whichever way they wanted.

Yet the abundance of talent and innovative approach seemingly weren’t enough to convince users to stick around, with most opting to take their hard-earned cash elsewhere.

Quibi has disputed the discouraging stats from Sensor Tower, saying in a statement to the Verge that the number of paid subscribers is “incorrect by an order of magnitude,” and claiming that their conversion rate is in fact “above mobile app benchmarks.”

Sensor Tower said some of the discrepancy between its figures and Quibi’s could be due to the fact that its numbers don’t reflect “if the app is installed again by the same user” after they previously deleted it. Whatever the case, the numbers from the reputable analytics firm don’t paint a positive picture for the company.

While Quibi has been described by Katzenberg in grandiose terms as being the “third generation of film narrative,” it appears many users aren’t yet willing to pay for short-form, on-the-go content – particularly during the Covid-19 pandemic, when few people are on the go at all.

Katzenberg said last month he was optimistic that the platform would take off after coronavirus restrictions on movement were lifted, but with such a drastic drop in preliminary users, it looks like the bite-sized content provider may also have somewhat of a bite-sized lifespan. 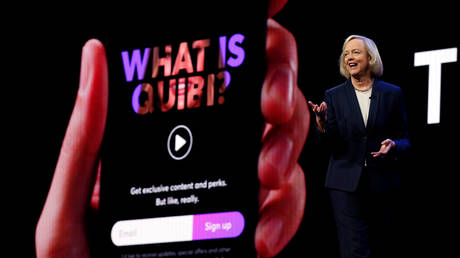 EU must present ‘clear and ade...

How to transfer WhatsApp data to new Android phone