Prime Minister Shinzo Abe, who led Japan for eight consecutive years, has said he is stepping down hours after he informed his ruling coalition that he was suffering from health issues.

Explaining his decision earlier in the day, Shinzo Abe said he feared the illness would affect his decision-making. “I will not be able to make proper judgments due to illness,” the outgoing premier clarified, as quoted by Kyodo news agency.

Abe has been suffering from ulcerative colitis, an inflammatory chronic disease, for many years. The prime minister himself revealed that his condition started to worsen around the middle of the last month, possibly prompting him to consider stepping down.

Moving on, Abe apologized “from the bottom of my heart” to his fellow countrymen, adding that he didn’t want his resignation to cause trouble for Japan’s domestic politics. With his eyes getting misty, the prime minister said it is now up to the Japanese to judge his legacy.

He mentioned a few foreign policy issues, including the peace treaty with Russia. Abe acknowledged that he regretted being unable to negotiate one with Moscow, saying the new government should continue his efforts in that regard.

He noted that his administration had created four million jobs while keeping the economy going.

Meanwhile, local media reported that he will continue to serve as prime minister until a new leader is chosen, thus avoiding the need to appoint an acting premier. Abe’s ruling Liberal Democratic Party (LDP) is reportedly set to arrange a leadership election next Thursday.

Abe, 65, is the longest-serving prime minister in Japanese history, having assumed office in 2012. A career LDP politician, he is the grandson of Nobusuke Kishi, who himself was prime minister of Japan from 1957 to 1960. 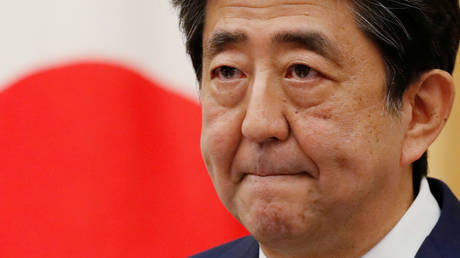