Latvia’s media council has announced a complete ban on seven RT channels, declaring falsely that they are “under the effective control” of a person subject to sanctions imposed by the European Union.

Kiselyov has indeed been under EU sanctions since Crimea voted for reunification with Russia in 2014, but he has nothing to do with RT or its broadcasting.

Of course, the knee-jerk move to banish RT based on false information could have been avoided had the council taken even a cursory glance at either RT or Rossiya Segodnya’s Wikipedia pages.

Entirely unaware that it had banned the wrong news organization, the NEPLP wrote in a dramatic statement that the “evidence” it had obtained against RT and Kiselyov is “very strong.”

RT’s main channel, as well as its Arabic, Spanish and Documentary channels, fall under the new ban.

The NEPLP also announced its intention to “inform media regulators in other EU countries” of the decision it has taken and considers that a “similar ban” on distribution of RT would be “acceptable” across the EU.

It is probably safe to assume for now, however, that a blanket ban on RT across the EU is not imminent.

Responding to the move, RT’s Press Service offered congratulations to the NEPLP, given that it will now “finally will be able to protect the Arab- and Spanish-speaking” demographics in Latvia from the “most influential Russian propaganda channel” in the West.

RT’s (real) editor-in-chief, Margarita Simonyan (who is not under EU sanctions), also responded to Riga’s blunder, noting a trend of sensational and often outlandish claims made by Western intelligence agencies.

The International Federation of Journalists also reacted to the ban, with its general secretary, Anthony Bellanger, saying that it “violates freedom of the press, the right of citizens to media pluralism and is a clear act of censorship.” The press freedom organization demanded the lifting of the ban “immediately.”

The NEPLP said the Latvian ban will remain in force “until Kiselyov is removed” from the EU sanctions list — or, presumably, until the country’s regulator realizes its mistake… and finds another pretext. 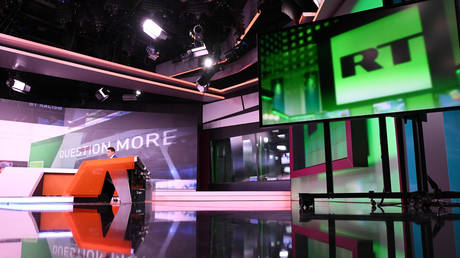