Multiple fire crews have been deployed to tackle a huge blaze raging at a biofuel complex in China. At least two people were injured during the incident.

Videos from the scene show massive plumes of thick smoke bellowing into the sky.

A witness told CGTN that the fire started during maintenance work at the plant. Other witnesses said they heard several blasts coming from the building.

China: Fujian Longyan New Energy Company fire. The scene is so full of fire. Multiple firefighters are rushing to rescue nearby inhabitants, shattered glass and are evacuating. 12-07-2020 pic.twitter.com/UVpQQpEzV3

A rescue operation is underway with multiple teams of firefighters deployed to the site. It is not clear how many people were at the plant during the incident. According to local media, at least two people were injured and two more are missing. 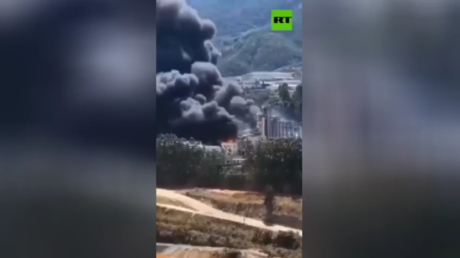