South Korea has warned it’s ready for an armed response against the North’s plans to drop leaflets if it violates the two states’ military agreement. Equipment is reportedly being set up to spread the leaflets “deep inside South.”

South Korean defense authorities said on Monday they are closely watching Pyongyang’s leafleting methods and are leaving a military response option on the table. Kim Jun-rak, the spokesperson of the South’s Joint Chiefs of Staff, stressed that Seoul was prepared to take military action if any aerial vehicle is flown over the Demilitarized Zone, which would violate the 2018 inter-Korean Comprehensive Military Agreement.

“If North Korea uses drones, for example, in violation of the inter-Korean military agreement, we will be forced to take corresponding military action,” Kim said at a media briefing on Monday.

The Korean Central News Agency (KCNA) reported on Sunday that Pyongyang printing shops had prepared 12 million propaganda leaflets in the act of vengeance. The tit-for-tat move comes after Seoul failed to prevent anti-Pyongyang activists from sending propaganda balloons into the North in recent years.

The North Korean state media agency called the leaflets from the South insulting, and said that only when southerners experience retribution will they “shake off the bad habit” and understand “how painful and how irritating it is to dispose of leaflets and waste.”

The largest-ever distribution of leaflets will be performed by various equipment, including over 3,000 balloons “capable of scattering leaflets deep inside South Korea.”

“Our plan of distributing the leaflets against the enemy is an eruption of the unquenchable anger of all the people and the whole society…The time for retaliatory punishment is drawing near,” KCNA wrote.

In the meantime, South Korean military officials have reported that the North has been detected reinstalling propaganda loudspeakers in multiple places along the inter-Korean border, after removing them under a 2018 summit agreement. In response, South Korea is also reconsidering the possibility of returning its loudspeakers, which were removed following the 2018 convention.

In recent months, tensions between the two countries have significantly escalated. Pyongyang has cut off virtually all cooperation with Seoul after expressing frustration over Seoul’s reluctance to break away from its ally, Washington, and declined a meeting between Kim Jong-un and US President Donald Trump.

Last week North Korea blew up the inter-Korean liaison office at its border town and said it would redeploy troops to two inter-Korean zones and renew military activities near the area.

Dropping propaganda brochures has been a popular psychological warfare tool since the Korean War, which is marking its 70th anniversary this Thursday. The two Koreas agreed to de-escalate cross-border propaganda, including loudspeaker broadcasts, several times since the war in 1950. The final agreement, intended to prevent military confrontation on the Korean Peninsula, was reached in 2018 and was widely seen as a step toward better relations. 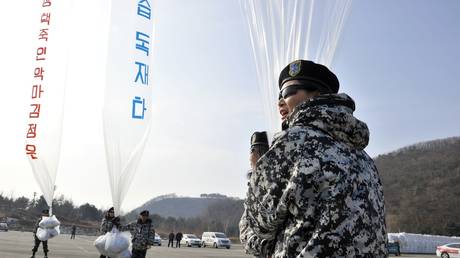