Hungary’s prime minister has labeled the EU’s plan to make access to funding conditional on the maintenance of the rule of law as “blackmail.” He then likened Brussels to the Soviet Union.

Viktor Orban, the Hungarian PM, told state radio on Friday that his country cannot accept EU plans to link access to European funds with the rule of law criteria.

On November 5, European leaders agreed that the next seven-year budget cycle would be conditional on the rule of law. Meaning that if the budget as a whole is accepted by a member state, the EU will be able to cut funding to governments that don’t respect the rule of law.

The PM said that he spoke to German Chancellor Angela Merkel on Thursday and reaffirmed his objections to the plan.
He told Merkel that if this regulation, tabled by the European Parliament and the German presidency, is passed, “then we have made Soviet Union out of the EU.”

This is not what we wanted … we did not create the EU for having a second Soviet Union.

Orban supplemented his remarks by saying it was customary for the Soviet Union to subjectively impose conditions to punish republics and communist governments.

In the old days, in the communist world, all this was called anti-Soviet activity, and now they want to punish Member States by referring to it as anti-European activity.

Stopping short of threatening to veto the budget, Orban said draft proposals were “without objective criteria … they want to blackmail countries on an ideological basis.”

Hungary is supported by Poland’s PM Mateusz Morawiecki in its opposition to the EU’s draft regulation.

On Thursday, Morawiecki said that he had written to EU leaders to tell them that Poland could not accept the proposals.

“Discretionary mechanisms, based on arbitrary, politically motivated criteria, cannot be accepted because they do not take into account the essential, substantive aspects of European law,” he wrote on Facebook.

Negotiations for the 2021-2027 budget are still ongoing. The package of a total of €1.8 trillion will be the largest ever financed through the EU budget, and looks to rebuild the European economy after the Covid-19 crisis. 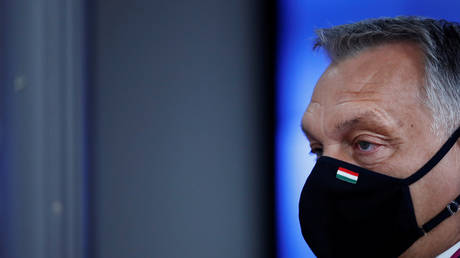