A second German district is reimposing lockdown measures following an outbreak of Covid-19 at the Toennies meat factory in the state of North Rhine-Westphalia, which saw 1,500 employees testing positive for the virus.

Officials said on Tuesday that the Warendorf district in the northern and most populous state would be placed under lockdown again, just hours after the neighboring district of Guetersloh made the same decision.

The Toennies slaughterhouse was forced to cease operations and around 7,000 workers placed into quarantine to avoid further spread of the infection. The two regions in the state of North Rhine-Westphalia will have to close its daycare centers, schools, museums, bars and other public places.

The renewed lockdown was initially set to impact the 365,000 people living in Guetersloh. Now Warendorf’s 280,000 inhabitants will be added, meaning more than 600,000 people will be returning to a lockdown state until at least June 30.

State premier Armin Laschet said the meat factory outbreak is now the “largest occurrence of infection” within Germany. Health Minister Karl-Josef Laumann explained the sudden and drastic turnaround saying that “the village” would not be understandable enough if the measures were voluntary.

Countries around the world began to lift their lockdowns in recent weeks, months after the coronavirus pandemic took hold. As restrictions are eased, the reproduction rate of the virus is being closely monitored as officials worry about a potential ‘second wave’ of the infection. 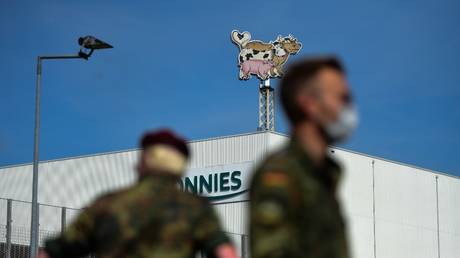