The government of Hong Kong released details on China’s new legislation on Monday. The national security law was formally approved by Beijing last week, and has already yielded its first prosecution.

Under the new law, police are able to search properties for evidence, and in “exceptional circumstances” do not require a warrant, if they have authorization from a high-ranking police official. The legislation also allows officers to freeze or even confiscate property involved in activities that are considered a national security threat

The law also obliges “foreign and Taiwan” agents and political organizations linked to an investigation into a potential national security breach to disclose information to the authorities. Such information can include their “activities, the personal particulars, as well as the assets, income, sources of income, and expenditure.”

A large portion of the new measures revolve around policing of online content. Law enforcement are now able to demand the removal or restriction of access to any “electronic message published on an electronic platform” deemed damaging to national security.

Failure to cooperate with the authorities – in both disclosing required information and taking down harmful content – can result in jail terms and large fines for individuals and information service providers, as well as “foreign agents” and organizations.

Such provisions apparently spell trouble for the social media platforms and messengers, including Facebook, WhatsApp and Telegram, which have vowed to not to cooperate with Hong Kong law enforcement, citing “human rights” concerns over the new law.

The new legislation has drawn much criticism in the West, with the US, UK and others accusing China of stifling the ‘freedoms’ of Hong Kong residents. British Prime Minister Boris Johnson has accused Beijing of a “serious breach” of London’s agreement with China on how the former UK colony should be governed under the “one country, two systems” formula. China, however, firmly rejected all the accusations, insisting the law is needed solely to reinforce security, and warning foreign powers to stay out of its domestic affairs. 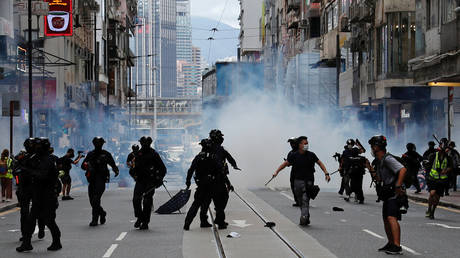