Anti-government sentiment shows no sign of quieting down in Belarus with tens of thousands attending a protest in the capital, Minsk on Sunday. Hours earlier, a pro-government rally was held in the city.

The demonstration is taking place exactly one week after the controversial presidential election in Belarus. The outcome, which gave incumbent President Alexander Lukashenko his sixth term, was rejected by the opposition, who accused the government of rigging the vote. A police crackdown launched against them angered the general public, with mass protests and walkouts held throughout the week.

Sunday’s protest in Minsk is focused around a memorial to the fight against Nazi Germany, which is located near a war museum and that has a lot of space around it.

Some estimates say as many as 100,000 people or even more may be attending, which would be an impressive achievement for the opposition since Minsk only has around two million residents.

Smaller but nevertheless massive rallies were held in other Belarusian cities like Grodno and Brest.

The demonstrators demand that Lukashenko stand down, while calling for justice for the victims of police brutality which occurred in the days after last week’s vote.

Lukashenko rejected all calls to review the results of the election, and has repeatedly referred to his critics as troublemakers trying to oust him in a foreign-orchestrated campaign.

Earlier on Sunday, a pro-government demonstration was held in Minsk with hundreds of thousands of people attending. The president appeared at the rally to thank his supporters and to declare that he would not bow to the pressure because doing so would mean forsaking his country.

Opposition media reported that many of the participants of that rally were brought from outside the city and made to participate under duress. 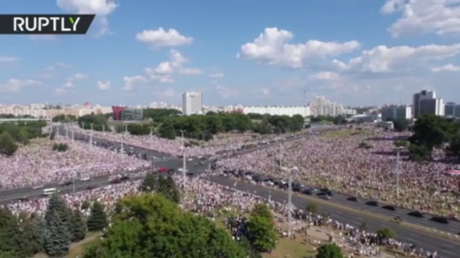 Iran will change its approach to U...