At least 77 people have been hospitalized for smoke inhalation after a huge blaze tore through a 33-story apartment block in Ulsan, South Korea. Hundreds were evacuated from the scene.

Footage posted online showed the ferocious flames ripping through the Samhwan Art Nouveau commercial and residential building in the southern city of Ulsan. According to local reports, the blaze broke out on the twelfth floor of the building and quickly spread right to the top of the block.

Strong winds are understood to have spread the blaze after a fire broke out at around 11pm local time Thursday. Footage from the scene showed flaming debris dropping from the building, some of which set fire to a nearby supermarket, though that fire was quickly extinguished.

The Samhwan Art Nouveau building contains 127 apartments, as well as shopping units, and is located in the Dal Dong district of the city.

More than 40 residents  were evacuated to the roof of the stricken building, and local reports said emergency crews were on site and providing them with assistance. A helicopter was also dispatched in the rescue effort.

There were also reports of residents fleeing the building barefoot, with some draped in wet towels in a bid to protect themselves.

“I heard the news that there was a fire, and then I ran away,” a man from the first floor told Yonhap. “My heart is still running.” 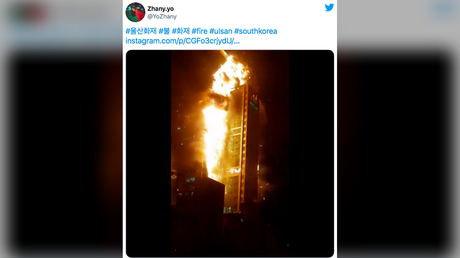 Human anatomy is evolving at faste...