When one of the brightest stars in the night sky began dimming in 2019, astronomers scrambled to figure out if this giant sun was about to explode or not. The mystery behind this unexpected darkness has now finally been solved.

Betelgeuse, roughly 1,000 times the size of our Sun, located some 725 light years from Earth in the Orion constellation suddenly began dimming last October. As is oftentimes the case when stars begin dimming or pulsating, some proposed theories about alien megastructures or impending supernova explosions.

However, astronomers using the Hubble Telescope have revealed the true cause of the dimming as superhot plasma emanating from the star’s surface, much like bubbles forming on boiling water, which gradually cooled before turning to a dust cloud.

This dust cloud then blocked the light from roughly a quarter of the star’s surface, reducing its overall brightness by more than two-thirds for a time.

To put this all in perspective, were the red supergiant star Betelguese placed in the center of our solar system, it would reach beyond Jupiter. And if it exploded in a supernova, it would be the first time in human history that our species would have the technology to both witness it firsthand and possibly even record the event.

For now, the star has regained its full luster, and though researchers at the Harvard-Smithsonian Center for Astrophysics have figured out the cause of the dimming, they have not yet found an explanation for the initial plasma eruption which caused it in the first place.

“No one knows what a star does right before it goes supernova, because it’s never been observed,” lead researcher Andrea Dupree explained.

“Astronomers have sampled stars maybe a year ahead of them going supernova, but not within days or weeks before it happened. But the chance of the star going supernova anytime soon is pretty small,” he added.

Dupree and his team will have another opportunity to monitor the monster star in late August or early September to explore further what’s really going on out there. 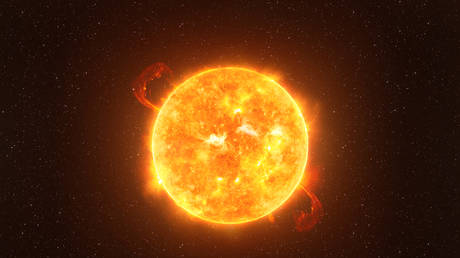