Scientists from the University of Tokyo claim to have observed a reaction showing quantum physics directly impacting biochemistry, which they suspect explains how certain animals can perceive the Earth’s magnetic field.

Researchers have long suspected that some part of various animals’ visual systems, including migratory birds, allows them to perceive the Earth’s magnetic fields, affording them the ability to navigate vast distances during migratory periods, but have never been able to find the mechanism. Until now, that is.

The University of Tokyo team used a custom microscope, which can detect extremely faint flashes of light, on a culture of human cells which contained an extremely light-sensitive material that can respond to changes in a magnetic field.

Photoreceptors, called cryptochromes, are found in the cells of numerous species, including migratory birds and dogs and, curiously, humans.

The mystery of how animals navigate using Earth’s magnetic field is now closer to being solved. Scientists recorded live cells responding to a magnetic field in the lab. https://t.co/HO4WtRpHzd#UTokyoResearch #magnetoreception #AnimalMigration Published in @PNASNews pic.twitter.com/NDConTSkOs

They then bathed the human cell culture, riddled with cryptochromes, in blue light which caused them to glow, at which point the researchers generated magnetic fields in several frequencies to stimulate the cells further.

Each time the magnetic field passed over the cells, the glow dipped by approximately 3.5 percent, indicating a direct reaction combining the fields of quantum physics and biochemistry.

The findings throw open the doors to study in the fields of animal magnetoreception (perception of magnetic fields) as well as investigations into possible adverse health effects in humans caused by magnetic field exposure.

There is also evidence to suggest that, on some level at least, humans are also capable of sensing the Earth’s magnetism, though scientists are far away from unlocking superpowers anytime soon.

“The joyous thing about this research is to see that the relationship between the spins of two individual electrons can have a major effect on biology,” says Woodward, in reference to the so-called radical pair hypothesis which attempts to explain how a magnetic field can influence how electrons spin around their atoms and thereby affect the function of cells in animals. 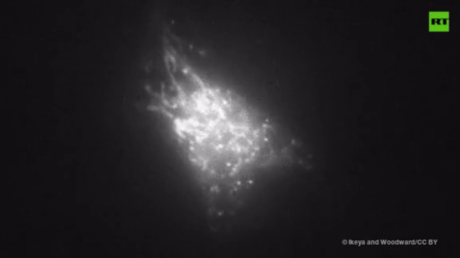