A team of international scientists has developed a shockingly simple device which they say has the potential to tame lightning and dramatically reduce the risk of naturally-occurring catastrophic bushfires.

The international team of researchers led by Dr. Vladlen Shvedov claims to have developed laser tractor beam technology which can control the path and direction of lightning.

The researchers used a laser beam which mimics the underlying process behind real-world lightning strikes, but in a laboratory environment, while creating a path that directs the resultant electrical discharges to specific target areas.

“We can imagine a future where this technology may induce electrical discharge from passing lightning, helping to guide it to safe targets and reduce the risk of catastrophic fires,” Shvedov said.

Many of the bushfires which ravaged Australia and stole headlines at the end of 2019 and in early 2020 were suspected to have been caused by dry lightning strikes.

The scientists used a surprisingly weak laser, one thousand times less than previous attempts, to achieve their results of targeted lightning.

The team claims the weaker laser beam means that, were the technology rolled out in the real world, it would be cheaper and more precise to produce at scale. However, this may also mean any budding supervillains out in the world might be able to control the weather for nefarious purposes.

The system works by trapping and heating graphene microparticles in the air using a low-intensity laser beam, which creates an irresistible path for lightning to follow the tractor beam’s path to a target.

“We have an invisible thread, a pen with which we can write light and control the electrical discharge to within about one tenth the width of a human hair,” co-author Professor Andrey Miroshnichenko, from UNSW Canberra, said.

He added that the incredibly precise device could also one day lead to optical scalpels for use in non-invasive surgery, with potential applications extending into other industries.

“We are really at the start of learning what this completely new technology might mean,” Miroshnichenko added. 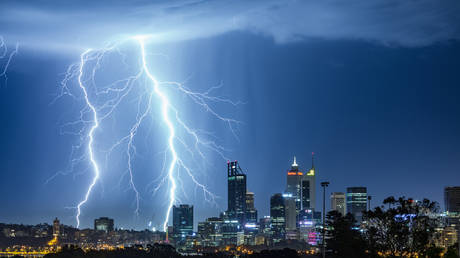