Scientists have confirmed the existence of ‘superbolts’ that can be up to 1,000 times brighter than the average lightning strike, producing more power than all solar panels and wind turbines in the US combined.

In two separate studies of extreme lightning events, researchers were astounded by the sheer power of mother nature that is unleashed far more regularly than previously thought.

So-called ‘superbolts’ were first detected in the 1970s, though they were suspected of only reaching 100 times the standard brightness of the typical lightning strike.

Now, however, using satellite observations, researchers at the US Los Alamos National Laboratory have discovered far more than they bargained for lighting up the Earth’s skies.

“Understanding these extreme events is important because it tells us what lightning is capable of,” says atmospheric scientist Michael Peterson.

They discovered roughly two million such events that fit the criteria, or roughly one out of every 300 lightning events, in the 24-month span of their study.

After evaluating years of data, scientists confirmed that ultrabright lightning bolts known as “superbolts” can produce at least 100 gigawatts of power. (For perspective, in 2018, all solar panels and wind turbines in the U.S. produced 163 gigawatts.)https://t.co/fXWPJk0gAs

The authors caution, however, that they may actually have missed brighter but shorter flashes, as they only counted strikes that lasted two milliseconds or longer.

“Using total energy to screen for the brightest lightning cases will miss short-duration yet extremely powerful optical pulses,” they write.

When the researchers then parsed the data for strikes 1,000 times brighter than average, they homed in on several hotspots of superbolt activity including in the central US as well as the Rio de La Plata Basin, which spans parts of Uruguay, Paraguay, Argentina and Brazil.

Meanwhile, a second study which analyzed 12 years of data taken from the Fast On‐Orbit Recording of Transient Events (FORTE) satellite counted super bolts that emitted 100 gigawatts of power or more.

“One lightning stroke even exceeded 3 terawatts of power – thousands of times stronger than ordinary lightning detected from space,” Peterson, who led both studies, said.

Understanding these immensely powerful events is crucial to improving our understanding of our planet’s atmosphere. There are also several projects exploring the possibility of harnessing the power of lightning for use by humanity, but wielding superbolts with current technology is still a remote possibility.

One superbolt flash near South Africa in 1979 was initially thought to be a nuclear bomb detonating. Another that struck Newfoundland in 1978 left a one-mile scar of damage, including split trees, distorted television antennae, destroyed electrical transformers and even craters in its wake. 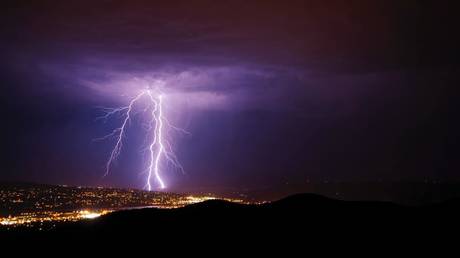