Amid a slow vaccine rollout in the European Union, several of the bloc’s member states say they were contacted by middlemen who offered to sell them some 900 million doses of Covid-19 jabs, EU anti-fraud agency OLAF has revealed.

The “alleged intermediaries” were asking for a total of 12.7 billion euros for the vaccines which they claimed to possess, OLAF said on Thursday.

European Commission President Ursula von der Leyen said last week that the EU was facing a “growing number of fraud and fraud attempts related to the vaccines.” She warned governments against purchasing shots from the black market and promised that the bloc was “fighting this trend.”

OLAF had earlier opened an inquiry into scam vaccine offers, saying that “many different forms” of them had already been encountered.

The fraudsters might try to sell vaccines illegally imported into the bloc, attempt to offer fake immunization, or provide some quality samples of the jab, but “vanish” immediately after receiving the first advance payment, the agency said.

The EU is purchasing its vaccines collectively, but member states are also allowed to sign deals on their own if they don’t contradict agreements negotiated by the European Commission – a window the perpetrators are trying to exploit.

An unnamed European Commission official told Reuters that the EU has been increasingly worried about “ghost” vaccines. Another official, who also chose to remain anonymous, pointed out that “nobody has any idea what is actually in these vials… The best case is it’s just not working, in the worst case it’s a very serious issue.”

The scam artists are active despite the fact that vaccine producers themselves have said that they will only work directly with governments. 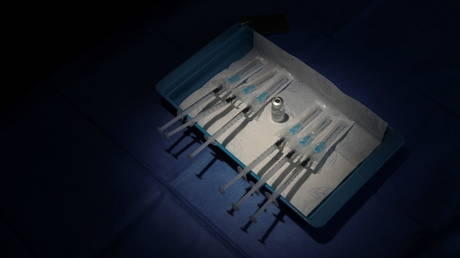