Silvia Sardone, who serves as an MEP for Italy’s Northern League Party, has revealed that she received a barrage of death and rape threats because of her opposition to the construction of a mosque in Milan.

According to screenshots of messages she received on social media, seen by journalists at Italy’s Il Giornale paper, the Italian member of the European Parliament has been threatened with violence and immolation for her outspoken opposition to the erection of temporary mosques in the city’s Via Novara area.

“We foreigners will come into your house and rape you,” read one message, the newspaper reported. One social media user messaged the politician describing Islam as “the only true religion that has existed until now,” while adding that “Christianity is incredible bullshit.”

“I have already instructed my lawyer to denounce this scum,” Sardone said of those behind the abusive messages. The 37-year-old says the threats “highlight, once again, that there is a latent hatred towards those who dare to demand rules, controls, security on the issue of mosques.”

A friend and close ally of Italy’s former deputy prime minister Matteo Salvini, Sardone said she is undeterred by the threats and will continue her criticism of the Democratic Party’s (one of the ruling parties in Milan) “submission… to certain Islamic communities.”

She said she will continue to press Milan Mayor Giuseppe Sala, a center-left-wing independent, to close what she dubs “illegal mosques,” claiming she has the support of citizens who have been ignored for years.

Meanwhile, Salvini is engaged in a war of words with the current Italian government, which is seeking to roll back migration rules introduced during his time as interior minister.

A decree approved on Monday will dramatically reduce penalties for aid agencies involved in migrant rescues on the Mediterranean. During his time in power, Salvini raised the potential maximum fine for aiding illegal migration into Italy to €1 million ($1.18 million). It has now been reduced to €50,000 ($58,845). 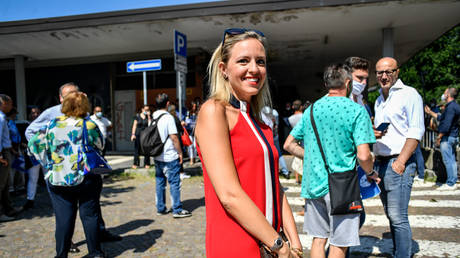