Close
Trending News
HomeWorldSafe behind the ‘iron curtain’: step inside an Israeli rocket shelter with RT’s producer on the ground (VIDEO)

When sirens sound and rockets rain down from above, Israelis flee to their bomb shelters. Watch RT’s Asiya Apakova give a guided tour of her building’s rocketproof safe room.

Amid the latest round of violence between Israel and Hamas, sirens sounded over Tel Aviv on Tuesday evening, as hundreds of rockets launched from Gaza screamed toward the city. The wail of sirens is a familiar sound for Israelis living within range of Hamas’ rockets, and it sends a clear message: take cover immediately.

RT Executive Producer Asiya Apakova lives in Tel Aviv, and gave a tour of her apartment building’s shelter. Located behind a thick iron door in the building’s lobby, the shelter allows residents to wait out air raids in safety. While some residents have their own personal shelters at home, the communal one in the lobby can take anyone who doesn’t, as well as nearby pedestrians who need to duck in quickly.

Apakova’s building is normally locked, but the front door is left open during attacks. “The door is open, so that anyone who is outside during the attack can get into the building and into the shelter,” she explained.

Every resident has a key to the shelter, which is used for storage during times of peace. Inside, residents leave bags of supplies – water, snacks and power banks – to tide them over during bombardments. Two air-conditioning units guarantee a pleasant climate inside the shelter.

The shelter has one window, but behind it, an ”iron curtain.”

From the moment a rocket is launched in Gaza, residents of Tel Aviv have around two minutes to make it to a shelter. Those living closer to the strip, for example in the cities of Ashkelon or Sderot, can have less than 30 seconds to prepare for impact. Israel’s Iron Dome missile defense system can intercept around 90 percent of incoming rockets, but sustained fire from Gaza in recent days has managed to overwhelm its capabilities.

Residents of Gaza, however, do not have such protection. While Hamas’ rockets have killed six Israelis, including two children, retaliatory strikes by the Israeli military have killed 56 Palestinians, including 14 children, according to figures from the Palestinian Health Ministry. 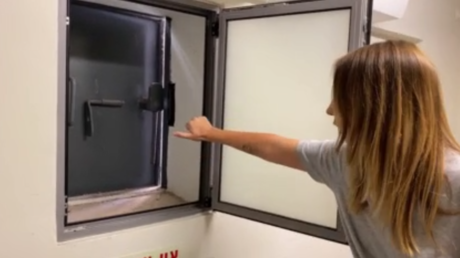