The coronavirus outbreak linked to the Sarang Jeil Church in Seoul, the worst in nearly six months, has led to a tightening of social distancing rules. A total of 315 cases connected to the church have been confirmed so far, officials said on Monday.

The Korea Centers for Disease Control and Prevention (KCDC) reported 197 new cases on Monday, a fourth consecutive day of triple-digit increases. This comes after several weeks with numbers generally in the 30s and 40s.

The latest cases brought the total infections to 15,515 including 305 deaths in a country that has been one of the world’s coronavirus control success stories.

Authorities have warned that the current situation is an initial stage of a large-scale transmission. “We’re facing a crisis where if the current spread isn’t controlled, it would bring an exponential rise in cases, which could in turn lead to the collapse of our medical system and enormous economic damage,” KCDC director Jeong Eun-kyeong said.

The country’s Vice Health Minister said earlier the Presbyterian church had provided inaccurate lists of its 4,000 members. While nearly 320 of them had tested positive, including Reverend Jun Kwang-hoon, more than 600 who authorities want to see in isolation were unaccounted for.

Jun, the leader of the church, is a conservative activist who has also been organizing anti-government rallies calling for the ouster of liberal President Moon Jae-in. A prosecutors’ office said on Sunday it wanted Jun’s bail revoked as he faces earlier charges of violating election laws.

In February, authorities struggled to contain an outbreak that emerged in a secretive Christian sect in the city of Daegu and became the country’s deadliest cluster. 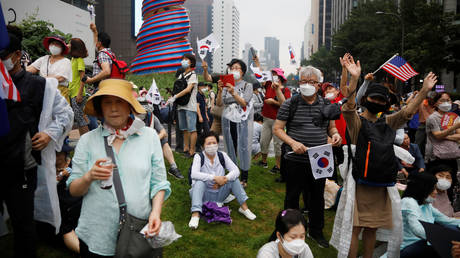 China is the biggest winner of the...