The South Korean government said on Tuesday it will impose stricter social distancing rules for the greater Seoul area as daily coronavirus cases rise. The prime minister admitted that anti-Covid efforts are facing a crisis.

New tighter curbs will come into effect on Thursday. Public gatherings of 100 people or more will be banned, while religious services and audiences at sporting events will be limited to 30 percent capacity. Clubs and karaoke bars are being ordered to broaden distance among visitors.

“[Our] anti-virus efforts have faced a crisis,” Prime Minister Chung Sye-kyun said, at a meeting of the Central Disaster and Safety Countermeasure Headquarters in Seoul. “Over the past week, the greater Seoul area had more than a hundred patients a day on average.”

The heightened curbs would cause “greater inconvenience in our daily lives,” the PM noted. “But we all know from our experiences that there would be an even bigger crisis if we don’t act now.”

The number of daily coronavirus cases stood above 200 for a fourth consecutive day, and new cluster outbreaks were registered in offices, medical facilities, and small gatherings in Seoul and in regions around the capital.

The government will determine its next steps within the next two weeks, with Health Minister Park Neung-hoo saying, “It’s important to bring a turnaround without further leveling up the measures.”

The Foreign Ministry urged that all nonessential overseas trips be canceled for at least a month. 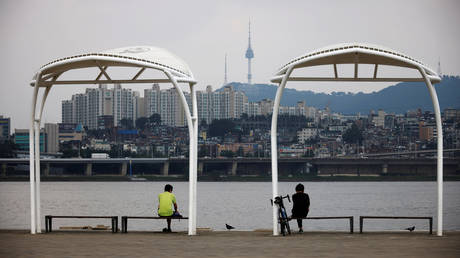