Close
Trending News
HomeWorldRyanair to cut most, if not all, flights to and from the UK & Ireland until ‘draconian travel restrictions are removed’

Ryanair to cut most, if not all, flights to and from the UK & Ireland until ‘draconian travel restrictions are removed’

Ryanair to cut most, if not all, flights to and from the UK & Ireland until ‘draconian travel restrictions are removed’

Amid the rapid spread of the highly contagious new variant of Covid-19, the carrier said it would operate “few, if any” flights in the region by the end of January, with sharp reductions expected from January 21.

Ryanair will significantly cut its flight schedules from Thursday Jan 21 which will result in few, if any, flights being operated to/from Ireland or the UK from the end of Jan until such time as these draconian travel restrictions are removed.

The company reiterated criticism of public health measures adopted across the UK and the Republic of Ireland, describing Irish travel restrictions in particular as “inexplicable and ineffective” and the “most stringent” in Europe.

The low-cost carrier also decried the open border between Northern Ireland and the Republic operating while travellers from the British mainland must undergo mandatory Covid-19 tests in order to gain access to Ireland.

It also criticised the Irish government’s vaccine rollout, comparing it to Denmark which has vaccinated ten times the number despite boasting a similar population to the Republic, calling for greater transparency in vaccination reporting.

Ryanair cut its current forecast of “below 35 million” passengers for the company’s financial year, which ends on March 31, to somewhere between 26 and 30 million passengers.

“Ryanair does not expect these flight cuts and further traffic reductions will materially affect its net loss for the year to March 31 2021 since many of these flights would have been loss making,” it said.

The Irish government has urged citizens to remain at home and limit non-essential travel until the end of January, but warned hospitality businesses to prepare for the possibility that they could remain closed until the end of March.

Meanwhile, the UK government introduced new legislation which allows for its current lockdown to remain in place until the end of March, if required, though Prime Minister Boris Johnson said he does not expect that will be the case.

“All customers affected by these further flight cancellations and further travel restrictions will receive emails advising them of their entitlements of free moves and/or refunds later today,” Ryanair said.

However, the no-frills airline has been repeatedly criticized by consumer rights groups over its slow handling of refunds throughout the pandemic.

British Airways and low-cost competitor EasyJet are also reviewing their flight schedules in light of the latest restrictions. 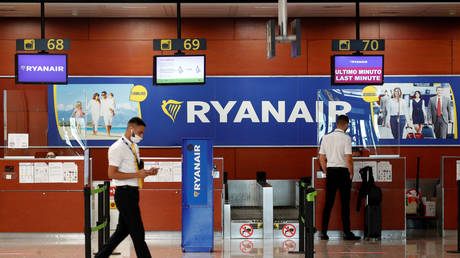