Russian researchers have found a way to ‘trick’ the immune system so that it prolongs the blood circulation of almost any nanomedicine, making the technology more therapeutically efficient.

The drug delivery technique developed by researchers at the Moscow Institute of Physics and Technology, the Shemyakin-Ovchinnikov Institute of Bioorganic Chemistry and the Prokhorov General Physics Institute has been described as “groundbreaking” in the field of nanomedicine.

Nanomedicine is a relatively new branch of medicine which involves filtering drugs more directly into the patient’s bloodstream and straight to the site of the disease — a method which can reduce toxicity and side effects elsewhere in the body. Because it delivers drugs, heat and even light directly to areas of illness and infection, it can be particularly useful for severe diseases like cancer.

The new study, published in the Nature Biomedical Engineering journal, resolves a key problem that has hindered the introduction of these novel drugs into clinical practice.

That problem is the remarkable efficiency of our immune systems in removing foreign agents from our bodies. When administered, nanoparticles can survive in our bloodstream for a matter of minutes or even seconds — but to be effective and reach their target, they need to last longer.

Now, researchers have discovered a way to trick our immune systems into allowing these foreign, but friendly, agents to remain in our bloodstreams long enough to do their jobs.

The method relies on ‘distracting’ the immune system by giving it something else to do. Our bodies are constantly removing old and ‘expired’ red blood cells from our bloodstream.

“We hypothesized that if we slightly intensified this natural process, we could trick the immune system. While it becomes busy clearing red blood cells, less attention is given to the clearance of the therapeutic nanoparticles,” lead researcher Maxim Nikitin said.

Nikitin explained that the technology is beneficial because it distracts the immune system in the “most gentle way” by taking advantage of its own innate mechanisms rather than by adding more artificial substances.

The ‘cytoblockade’ approach was found to be universally applicable to all nanoparticles of differing weights and sizes. Even better, the technique was not found to inhibit the body’s ability to fight off regular viruses.

The Russian team has demonstrated the technology on cancer patients, with the cytoblockade approach increasing efficiency in delivering nanoparticles to the tumor by up to an astonishing 23 times. 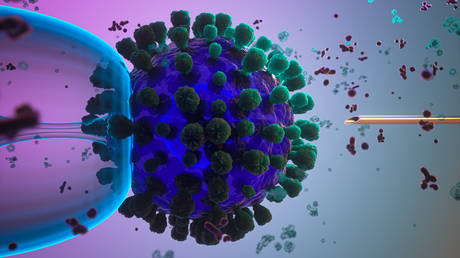