The NEOWISE comet has just passed so close to the Earth, it has been seen with a naked eye. Yet, Russian cosmonaut Ivan Vagner saw right from space – and shared his photos of the rare event.

The celestial object, also known as C/2020 F3, raced past our planet at a distance of some 103 million kilometers. Vagner snapped a photo of it while on board the International Space Station (ISS) and shared the picture on Twitter.

During the next revolution I tried to capture the C/2020 F3 (NEOWISE) comet a bit closer, the brightest one over the last 7 years.

Its tail is quite clearly visible from the @Space_Station!#ISS #comet #NEOWISE pic.twitter.com/FnWkCummD6

The cosmonaut’s day in orbit appears to have been replete with memorable events – he also captured a photo of a meteor entering the Earth’s atmosphere not long before that.

A couple of minutes ago I captured 2 rare events at once: #LuminousClouds at sunrise and a #meteor entering the atmosphere. A truly mesmerizing view!

Now is the high season for luminous (or mesospheric) clouds. These are the highest clouds forming at an altitude of about 80 km. pic.twitter.com/3rRg3BbGyc

NEOWISE was first discovered by NASA’s Near-Earth Objects Wide-field Infrared Survey Explorer space telescope – hence its name – on March 27. Those, who managed to see it in recent days should consider themselves really lucky, because it’s not expected to approach Earth again for another 6,800 years.

Vagner, a flight engineer with the ISS Expedition 62/63, arrived at the space station for the first time in his career this April. Since then, he’s regularly shared via Twitter an array of stunning photos of the Earth’s surface taken from orbit. One of the most notable was his snap of Peru’s famous Inca citadel Machu Picchu, high up in the Andes.

#MachuPicchu is an ancient city in America located on a 2,430-metre mountain ridge. The city is also called the City of Ruins and the City in the Clouds. And this name absolutely speaks for itself, as it took me almost a month to catch it. pic.twitter.com/am3p414Grz 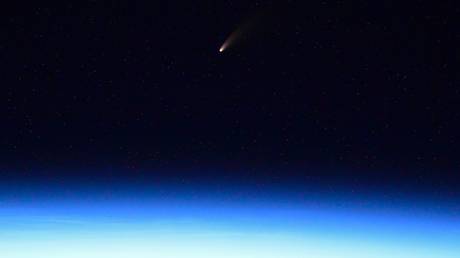