Scientists in Russia and Germany have developed a new way to ‘stack’ sodium to create cheaper and more efficient batteries that could eventually be an alternative to the mass-produced and environmentally unfriendly lithium type.

Lithium batteries are essential to the world today. From mobile phones to laptops, almost all electronics leverage lithium and currently it is widely understood that there is no remotely effective alternative. The problem when something is so ubiquitous, of course, is that eventually it is likely to run out – and become more expensive in the process.

However, scientists from Russia’s National University of Science and Technology (NUST), the Russian Academy of Science, and the Helmholtz-Zentrum Dresden-Rossendorf research laboratory have found a solution to the problem which involves “stacking” sodium to make a “sandwich”-like battery.

What they discovered is that, when sodium atoms are layered in a particular way, sodium (and other alkali metals) can very much demonstrate the same qualities as lithium. In fact, a two-layer arrangement of the cheaper sodium can “demonstrates anode capacity comparable” to that of a conventional graphite anode in lithium-ion batteries.

To create the cheaper alternative, atoms are placed in the space between two sheets of graphene under high voltage, akin to how a battery itself would work.

Prior to the research, it was widely understood that lithium atoms in batteries could only be located in one layer, and that increasing the amount of layers would increase instability. Scientists now know that it is possible “to create multilayer stable lithium structures,” explained Ilya Chepkasov, researcher at the NUST MISIS Laboratory of Inorganic Nanomaterials. As for sodium, it actually increases in stability the more layers there are, researchers say.

In 2019, Amnesty international challenged industry leaders to clean up their battery supply chains. Mined mostly in China, South Korea, and Japan, lithium’s carbon footprint continues to grow as deposits diminish and demand increases, particularly due to its usefulness in the burgeoning electric car industry.

Amnesty warned about the deep-sea mining taking place to farm lithium, which studies have predicted will have an irreversible impact on biodiversity.

The research team plans to test their thesis at the Max Planck Institute for Solid State Research in Stuttgart. If proven successful, it may lead to a new generation of sodium batteries that would be both cheaper and potentially more effective than our current lithium ones. 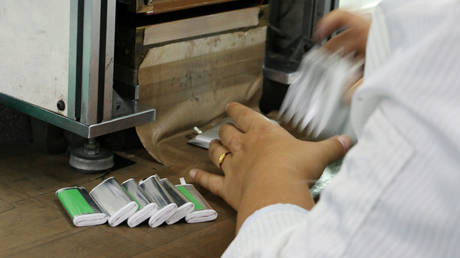