Moscow and Ankara are discussing ways to reach a ceasefire in Libya, but one of the warring sides – the GNA in Tripoli – is not on board, instead it’s counting on winning militarily, Russian Foreign Minister Sergey Lavrov said.

Lavrov noted that the other side, Khalifa Haftar’s Libyan National Army (LNA) “is ready to sign a document on the immediate cessation of hostilities.”

Libya remains divided since NATO’s bombing campaign in 2011 led to the overthrow of longtime leader Muammar Gaddafi, and the devastation of the once prosperous North African state.

The fighting between the GNA, backed by the UN, and the LNA, which is supported by many locals, has intensified since last year, but neither of the sides seem strong enough to claim victory.

The GNA has received more military assistance from Turkey in recent months which changed the situation in its favor and may possibly explain Prime Minister Fayez al-Sarraj’s reluctance for a truce.

The Russian FM recalled that in January, during the talks in Moscow, it was Haftar who refused to lay down arms due to his forces being on the advance and nearing Tripoli.

But, despite the stalemate, Moscow and Ankara continue to coordinate approaches that would allow them to immediately announce a ceasefire in the war-torn country, he said.

“Our Turkish colleagues are working with the GNA in this direction. I hope they’ll succeed in achieving the only right solution in the current circumstances,” he pointed out.

And this solution is a truce, Lavrov stressed, adding that both Russia and Turkey “are sending a clear signal” to the warring parties that without it any talks on a unified government and reforms would be impossible.

Both al-Sarraj and Haftar have said that there can be no military solution to the conflict, with Lavrov expressing regret that those statements “haven’t yet translated into practical steps.” 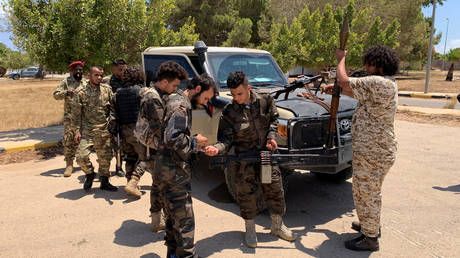 Culture-starved Brits will be allo...