Close
Trending News
HomeWorldRussia to blame for landmines found in Libya, says US Africa Command in another self-serving ‘bombshell’

Russia to blame for landmines found in Libya, says US Africa Command in another self-serving ‘bombshell’

Russia to blame for landmines found in Libya, says US Africa Command in another self-serving ‘bombshell’

As warring Libyan factions seek aid from Turkey and Egypt, AFRICOM is blaming Russia for landmines that were found near Tripoli in yet another alarmist ‘intelligence assessment’ aimed at getting US troops sent back to Africa.

On Wednesday, AFRICOM posted four photos of booby-trapped debris found between Tripoli and Sirte last month, as the Libyan National Army (LNA) retreated before the Turkish-backed Government of National Accord (GNA). The landmines used to rig the explosives were “assessed to have been introduced into Libya by the Wagner Group,” a mercenary outfit AFRICOM insists is acting on behalf of the Russian government.

NEWS: #Russia, Wagner Group complicating Libyan ceasefire efforts
—
“Irresponsible tactics are prolonging conflict & responsible for the needless suffering & deaths of innocent civilians. Russia has the power to stop them, just not the will.” – MG Geringhttps://t.co/B47YXXwJS0 pic.twitter.com/EdRt7oQUTX

To bolster the claim of Russian meddling, AFRICOM referred to its May allegations – that Russia sent 14 MiG-29 fighters into Libya – as proven fact, rather than a triple-qualified assessment as stated at the time. Moscow has dismissed the claim as “not corresponding to reality.”

AFRICOM’s claim that the landmines shown in the photos had to have come from Wagner is curious. They are standard Soviet Union designs, which Libya had been buying for decades. Almost all of the equipment and weapons used by both the LNA and the GNA comes from the stockpiles of Colonel Muammar Gaddafi’s government, which was overthrown in 2011 by NATO-backed militants. Gaddafi himself was brutally lynched after he was injured in a NATO airstrike near Sirte, the site of recent fighting.

Far from bringing peace and democracy, the rebellion plunged Libya into chaos as warlords and terrorists fought for land and control of oil fields. Yet General Bradford Gering, AFRICOM’s operations director, now laments the “total disregard for the safety and security of Libyans” supposedly shown by Wagner and Russia.

The Tripoli-based GNA was supposed to be the internationally recognized coalition that would end the conflict, but the Tobruk-based LNA soon split away, accusing the GNA of ties to Islamist militants. While the GNA was on the verge of losing Tripoli last year, its loyalists have managed to push the forces of General Khalifa Haftar back thanks in part to a massive sea-lift of troops and weapons from Turkey.

Ankara launched its operation after the collapse of peace talks jointly sponsored by Russia and Turkey – backed by France and Germany – in January. LNA leader General Khalifa Haftar rejected a ceasefire while his forces were winning, and the GNA insisted that Haftar was a war criminal they could not negotiate with.

Turkey’s weapons shipments pitted it against France last month, as a Turkish ship almost clashed with a French frigate enforcing the increasingly theoretical embargo on sending arms to Libya.

Neighboring Egypt may now find itself drawn into the conflict as well, after the parliament in Tobruk backing the LNA passed a resolution on Monday authorizing the “Egyptian armed forces to intervene to protect the national security of Libya and Egypt if they see an imminent danger to both our countries.”

Cairo is a major recipient of US military aid, to the tune of $1.4 billion a year. AFRICOM has not commented on the situation, however, perhaps because under the current division of the globe between US combatant commands, Egypt falls into CENTCOM’s area of responsibility.

Despite its name and area of responsibility, AFRICOM is actually headquartered in Stuttgart, Germany, and has not had a troop presence in Libya since April 2019. For the past six months, the command has been sending out alarmist press releases and aggressively leaking to the media, with the apparent goal of creating “an opportunity for us to get back into Libya again,” as one anonymous AFRICOM official put it at one point. 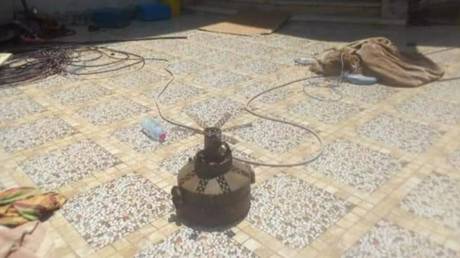