Russian President Vladimir Putin has condemned the US for “bypassing the UN” to impose “illegal” sanctions on Syria. He said humanitarian efforts in the war-torn country are increasingly important during the Covid-19 pandemic.

Putin was speaking during a video conference on the Syria crisis on Wednesday, along with Iranian President Hassan Rouhani and Turkish President Recep Tayyip Erdogan.

The Russian leader said the goal of the new sanctions imposed by Brussels and Washington was to “strangle the Syrian republic,” and that other parties must use all available humanitarian channels to provide assistance to the country.

Rouhani condemned what he called Washington’s “illegitimate goals” in Syria and reiterated that there is “no military solution” to the years-long conflict.

He slammed the US for “plundering of the natural wealth” of Syria and called on Washington to withdraw its forces. Rouhani also hit out at the the “Zionist regime [of Israel],” saying that its occupation of the Syrian Golan Heights is a “threat to the security of the entire region.”

Erdogan said Turkey does not want the conflict to “drag on any longer” and that a “lasting solution” was needed. He noted that Ankara had been “receiving lots of refugees from Syria” and said Turkey’s cooperation was critical in talks to decide the country’s future.

Putin also said it was important for talks to take place on the post-conflict restoration of the Syrian economy, culture, social security and on bringing back displaced refugees.

The three leaders lamented the fact that their meetings must be virtual during the Covid-19 pandemic, but Putin indicated that he is willing to visit Tehran for in-person meetings “once it’s safe.” 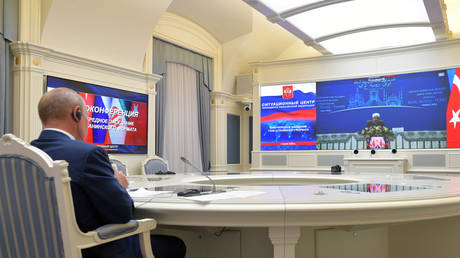