A Russian UN Security Council resolution on Syrian-Turkish border crossings has been rejected, after Moscow and Beijing vetoed a draft by Western members who sought to reopen the checkpoints not under government control.

The international body, working in online format due to the coronavirus pandemic, rejected the Russian proposal with four votes in favor, seven against and four abstentions. It is the fourth time that the vote on the rival measures has failed, with the council struggling to reach a compromise as the mandate of the border crossings is expiring on Friday.

Earlier on Friday, 13 out of 15 Security Council members supported the draft prepared by Germany and Belgium. Moscow and Beijing used their veto power to stop the motion, however.

Russia argues that the situation in Syria has changed dramatically in recent years and most of its territory is now under government control. With many areas in need of humanitarian aid being easily accessible from within Syria, Moscow has offered to leave open just one border crossing in militant-controlled territory for the next 12 months.

“We all shouldn’t forget that the mechanism was established in 2014 as an urgent and temporary exceptional measure,” the Russian mission to the UN wrote.

There is no doubt that it contradicts the international humanitarian law and undermines the Syrian sovereignty.

Russia criticized the so-called cross-border mechanism for the lack of monitoring and accountability, saying that the closure of other crossings in areas beyond the control of the legitimate Syrian authorities had stimulated cooperation between the UN and Damascus and actually resulted in the increase of aid flow.

We repeatedly pointed out problems in the work of #CBM monitoring system. They remain unresolved. Our position on the mechanism’s always been clear – the gradual closure of the crossings and phasing out of the whole mechanism based on the assessment of the situation in 🇸🇾 #Syria pic.twitter.com/VujgICy9jo

The Security Council had authorized the humanitarian operation in in 2014, at the height of the war in Syria, to facilitate the flow of humanitarian aid to areas under control of various armed groups. In addition to Turkish checkpoints, border crossings with Jordan and Iraq were also included in the arrangement, but were shut down this January. 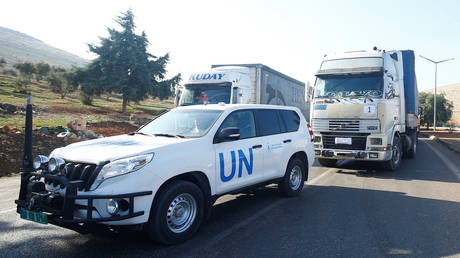