Comprehensive coverage of the crash that killed 41 passengers at Moscow’s Sheremetyevo Airport last year, and a human insight into the resonating tragedy, has propelled RT to the finals of the 2020 International Emmy contest.

The list of finalists in the 2020 Emmy’s News and Current Affairs roster features eight nominees from six countries, namely Brazil, Nigeria, Qatar, Russia, Sweden, and the UK. Russia is traditionally represented by RT International, via which it scored its 7th nomination in the category since 2010.

RT won the prestigious nomination for covering one of Russia’s worst aviation incidents of recent times. Last year, it aired and published a string of reports examining the timeline of the crash on May 5, 2019, which involved Aeroflot Flight 1492.

Winners will be recognized alongside their American news peers during an online ceremony on September 21.#iemmyNEWS #iemmys pic.twitter.com/5qVWte0NLd

The incident was immediately on RT’s radar, after the ill-fated plane, a domestically built, narrow-body Sukhoi Superjet 100, declared an emergency. The jet, with 78 passengers and crew on board, reported that it had suffered a lightning strike shortly after takeoff, which ostensibly led to a malfunction of the communications system and autopilot.

Flight 1492 was diverted to Aeroflot’s home base, Moscow’s busy Sheremetyevo International Airport. Packed with passengers and overloaded with tons of unburned fuel, the Superjet – being flown in a challenging manual mode – made a hard landing, bounced several times on the runway, and burst into flames that engulfed the aircraft’s rear in the blink of an eye.

The RT television network followed the tragedy as it unfolded, with its reporters covering the terrifying scenes of the evacuation live on air. Of the passengers and crew – seated mostly in the aft, where the emergency exits were unusable due to the fire – 41 didn’t make it out of the burning aircraft, while 37 were lucky enough to reach safety via inflatable slides in the plane’s nose.

On-the-spot reporting aside, the broadcaster did its utmost to bring viewers the stories of survivors and those who lost their loved ones in the inferno – not to mention the testimonies of the crew who helped people escape. One year on, it still keeps abreast of the latest developments – primarily, the ongoing crash investigation.

RT’s previous International News & Current Affairs Emmy nominations were for its reporting on a massive fire in the Siberian city of Kemerovo (2019); the humanitarian crisis in Mosul, Iraq (2018); the 70th session of the UN General Assembly (2016); the hunger strike among Guantanamo Bay inmates (2014); the Occupy Wall Street protests (2012); and then-US President Barack Obama’s first visit to Moscow (2010).

The winner of the 2020 International Emmy Awards for News and Current Affairs will be announced at an online ceremony on September 21. 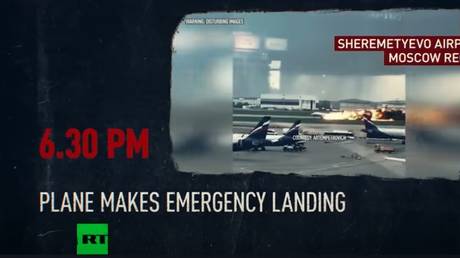 PS5 release date may have been lea...