Rotting corpses chewed on by rats: Authorities push forward with probe into appalling treatment of cadavers at Paris university

Rotting corpses chewed on by rats: Authorities push forward with probe into appalling treatment of cadavers at Paris university

French officials have begun a new phase in an investigation over the mishandling of human bodies donated to a Paris university research center after photographs taken at the facility revealed horror-film-like conditions.

An ongoing probe into “violations of the integrity of a corpse” at the Center for Body Donations (CDC) of Paris Descartes University has been transferred to magistrates by prosecutors who launched an initial investigation into the matter last year. Magistrates are endowed with wider powers and are better suited to investigate the affair, according to a lawyer representing affected families who pressed charges against the university.

France’s l’Express reported last November that cadavers gifted to the center for scientific research were being stored in unsanitary and inhumane ways, creating a “mass grave in the heart of Paris.”

The paper, which was given photographs taken inside the facility, reported that bodies were stacked on top of one another “nude, decomposing, with their eyes wide open.” Dismembered corpses had been chewed on by rats and piles of human flesh were being kept in garbage bags. The outlet said that one photograph showed a severed head lying on the floor. Some of the body parts were sold to private companies, the newspaper alleged.

The horrific report prompted the launch of a government inquiry, as well as an apology from the university, which admitted that its practices were not consistent with “societal demands for respect for dignity.”

The facility was shut down by the French government following the grisly revelations. Government inspectors concluded in June that the university was guilty of “serious ethical breaches” in its management of the CDC. 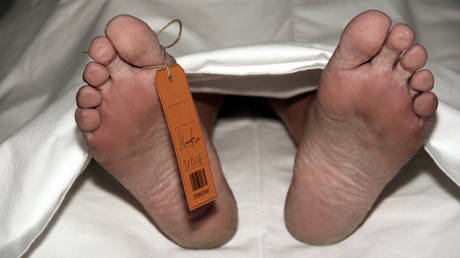