Afghanistan’s capital has been hit by multiple rockets in an attack that appears to have targeted the main diplomatic district which houses embassies. At least 10 people have been injured in the attack, local media reported.

“Several rockets were fired from two vehicles,” Ministry of Interior spokesman Tariq Arian said on Tuesday, as cited by Reuters.

Photographs and videos show plumes of black smoke rising from the district as large booms can be heard in the distance. Workers in embassies were rushed to safe rooms during the barrage.

#Afghanistan – Witnesses say at least 10 people have been injured in #Rockets fire in #Kabul so far, but security officials have not commented on casualties. #afghanistanindependenceday https://t.co/oeq34xPEYo pic.twitter.com/UlomD0Xdac

It’s not clear whether anyone has taken responsibility for the attack, which came a day before the nation celebrates Independence Day.

The rocket attack comes amid efforts by Kabul to secure a formal peace with the Taliban. Last week, the Afghan government released dozens of “hardcore” Taliban prisoners, seen as a prerequisite for moving forward with peace negotiations. 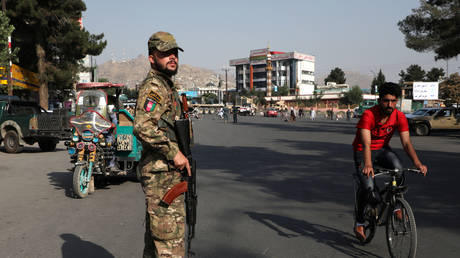 A-level results U-turn: How are un...