At least two unguided rockets fell inside Iraq’s Taji military base that houses US troops, local media has reported, citing the country’s military. No information on damage or potential casualties was immediately available.

Camp Taji, located some 27km (17 miles) north of the Iraqi capital, came under rocket fire late on Saturday. At least two projectiles fell inside the base, Iraqi military confirmed to local media.

While no reports on damage or casualties were readily available, unconfirmed imagery circulating online suggested the attack might have sparked a fire at the base.

The Taji base, as well as other military compounds used by the US-led coalition, have repeatedly come under attack in recent months. The worst such incident happened occurred March, when two US and one British soldier were killed at the base, while a dozen other personnel, including Iraqi soldiers, were wounded.

The chain of attacks on the facilities housing US troops was sparked by the US assassination of a top Iranian general Qassem Soleimani and deputy commander of the Iraqi Popular Mobilization Forces (PMF) early in January.

The two high ranking officials were killed in that drone strike outside Baghdad’s airport. 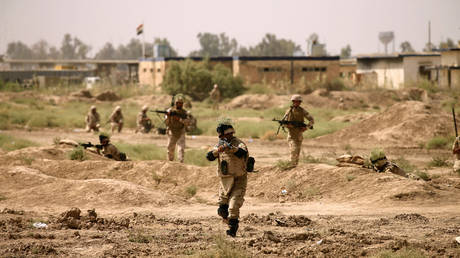