Hundreds of protesters attacked a supermarket in Sao Paulo, Brazil, amid nationwide outrage over the alleged killing of a black man by two security guards at another of the chain’s outlets.

Footage from RT’s Ruptly video agency shows total mayhem at the ‘Carrefour’ food store, as protesters ransacked the shop with seeming impunity. Products are seen littering the aisles as alarms are heard ringing in the background. Demonstrators also pelted the store with rocks, shattering its windows, and set a fire inside. The blaze was later extinguished.

The unrest was part of nationwide protests sparked by the death of a black man at a Carrefour store in the southern Brazilian city of Porto Alegre. The incident occurred on the eve of Black Consciousness Day in Brazil.

Footage of the incident shows two security guards restraining and beating the victim, identified as 40-year-old Joao Alberto Silveira Freitas. A store employee reportedly altered the guards, claiming that Freitas threatened to attack her, local media reported. It has not yet been determined what caused Freitas’ death, but some reports have cited preliminary medical analysis pointing to asphyxiation.

One of the security guards was reportedly an off-duty policeman. Both suspects have been arrested and are currently being investigated for homicide. The supermarket chain said on Friday that it had ended its contract with the security firm whose employees were allegedly involved in the killing.

The video also shows one of the guards kneeling on Freitas’ back, drawing comparisons to the killing of George Floyd at the hands of the Minneapolis Police in May. Like Floyd’s death, the incident has triggered anti-racism protests, with some demonstrators even carrying signs in Portuguese reading “Black Lives Matter.”

On Friday the demonstrations turned violent, with Carrefour stores in several cities across Brazil being attacked and vandalized by angry mobs. 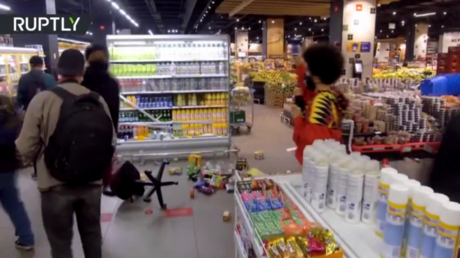 Wave of protests: Antifa marches a...