An Australian research vessel has captured the spectacular death knell of a presumed meteorite as it streaked across the Tasmanian sky, bursting into a bright green hue before disintegrating.

Watch this stunning footage of a meteor breakup captured by @CSIRO‘s research vessel ‘Investigator’ off the southern coast of Tasmania.

The vision shows the extremely bright #meteor crossing the sky and then breaking up over the ocean. Read more: https://t.co/mJSMOPNCjr pic.twitter.com/GLgQWskRma

In a stroke of good luck, the RV Investigator has a 24/7 livestream camera which just so happened to have the perfect filming angle.

“The meteor crosses the sky directly in front of the ship and then breaks up – it was amazing to watch the footage and we were very fortunate that we captured it all on the ship livestream,” says CSIRO Voyage Manager John Hooper.

The size and brightness of the meteor was incredible.

The vessel is currently engaged in seafloor mapping of the Huon Marine Park for Parks Australia while also conducting oceanographic studies and testing a variety of scientific instruments; but, arguably, its greatest recent find was in the starry sky, not the murky deep.

The Investigator’s live stream is available here in case anyone wants to wait for another meteorite to stream in front of the camera, though the odds are astronomically low. 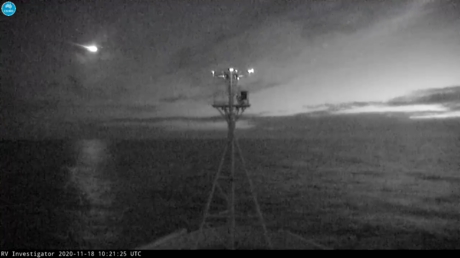