The growing inability to take collective action on pressing issues such as climate change and the Covid-19 pandemic is a sign that the ideology of liberalism has gone “totally wrong,” cultural philosopher Slavoj Zizek told RT.

“We simply cannot – especially in the so-called developed West – unite even on basic values that would allow the proper functioning of democracy itself,” Zizek told RT’s Afshin Rattansi on his show Going Underground.

Look at the United States today, which is practically in a situation of an ideological civil war. This also explains the resistance to vaccination. This is ideological liberalism going totally wrong.

“Yes – debate! But when a society comes to a conclusion, we have to be together and do it. It’s more and more impossible to do it today,” Zizek said.

The philosopher argued that the world is living through more disintegration and moving toward greater “unreadiness to collective action,” which is badly needed to tackle major issues like the Covid-19 pandemic and climate change.

Our societies are falling apart into two extremes. On the one hand, [we have] conspiracy theories. Some people call this the post-truth logic or universe. On the other hand, we have experts who pretend to act in a neutral way, just telling us the truth. But they are, of course, not real experts – they are always already partial. 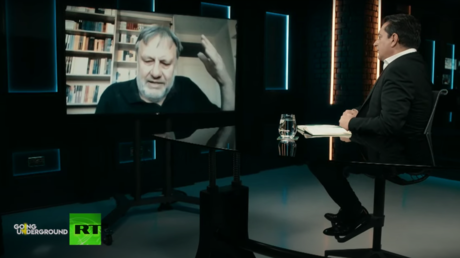 Hacker is blocked after tweeti...