Search and rescue teams have pulled a four-year-old boy alive from the ruins of a building which collapsed on Tuesday in Mahad, western India.

Scores of people became trapped when the five-story apartment building suddenly crashed to the ground amid heavy rainfall, with emergency services, local residents and relatives of the missing rushing to the scene to help look for survivors.

At least 76 people were found alive, including the young boy, whose discovery was welcomed with delighted cheers by the search teams gathered around. The bewildered youngster – coated in dust – suffered only minor injuries and was filmed sitting up on a stretcher as he was taken from the scene.

VIDEO: 🇮🇳 Rescue workers cheer as a four-year-old boy is pulled alive from the rubble of a collapsed building in #Mahad, western India, hours after the five-storey apartment block came down, killing 11 and burying up to 60 others pic.twitter.com/ytuKUpF2eG

#WATCH: A 4-year-old boy was rescued from under the debris at the site of building collapse in Mahad, Raigad. #Maharashtra pic.twitter.com/polMUhzmqN

Tragically, the child’s mother was discovered dead at the disaster site a short time later, a local official told reporters. At least nine people lost their lives in the collapse, while several more remain unaccounted for.

One local police officer said the building fell like “a house of cards.” It was reportedly six years old and home to around 200 people. 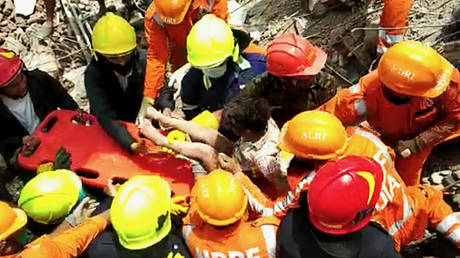