Chinese scientists resolved the headline grabbing enigma behind the mysterious substance China’s Yutu-2 rover discovered on the far side of the Moon last year. The explanation is quite mundane, however.

A scientific team from China released their analysis of a dark green, glossy substance that the lunar rover – part of the Chang’e-4 mission – discovered back in 2019, catching the eye of many in the space exploration community.

At the time, a drive team behind Yutu-2 rover described it as something reminiscent of “gel,” which itself sounded unusual given the Moon’s landscape is believed to be dusty and dry, without any sign of moisture found to date.

Now, in an article published in the latest edition of the Earth and Planetary Science Letters, Gou Sheng and colleagues explain they scrutinized data from the Yutu-2’s cameras and the rover’s infrared sensor called VNIS, an instrument that detects light as it is scattered or reflected off materials.

The data analysis helped them figure out what exactly was found deep inside the Von Karman crater situated at the South Pole Aitken basin on the far side of the Moon one year ago.

The scientists made use of the so-called “spectral unmixing,” a procedure in which the VNIS imagery data was broken down so that the likely composition of the mystery material could be established.

Finally, they came up with an answer that was perhaps the likeliest of all. “It was formed by impact-generated welding, cementing, and agglutinating” of space rocks and breccia, broken fragments of minerals cemented together, the Chinese scientific team concluded.

The results of the study aren’t rock solid, however. The authors warned that their analysis was impacted by the fact that VNIS images were taken in low-light conditions, and getting them right was extremely challenging.

The Chang’e-4 spacecraft, carrying the six-wheel Yutu-2, made its historic soft landing in the Von Karman Crater on the far side of the Moon back in January 2019. The rover traversed the crater throughout recent months, switching to dormant mode to save power. 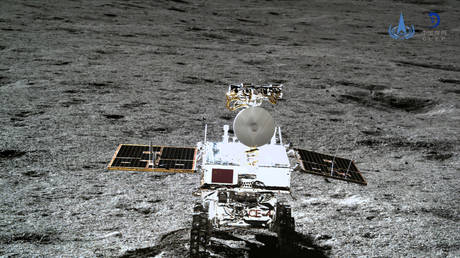