Soldiers who have taken up arms in Mali have arrested the nation’s top officials, including President Ibrahim Boubacar Keita and Prime Minister Boubou Cisse, sparking concerns in the UN and the African Union.

Keita’s detention came after a period of uncertainty amid reports suggesting that soldiers mutinied at the Kati military base outside of the Malian capital of Bamako and arrested a number of senior military and civil officials, including several ministers.

Both the president and the prime minister are “at the hands” of the rebelling military, according to various sources both within the government and the mutineers. Unverified photos and videos circulating on social media allegedly showed both politicians being escorted by the military in a car before arriving at the Kati base.

The general public, as well as an opposition coalition, have been calling for Keita to resign and appear to be welcoming the detentions, as crowds of people could be seen celebrating the news on the streets of Bamako and showing their support for the military. The opposition coalition also backed the mutineers, saying that the developments were not a coup d’état but “a popular insurrection.”

Cisse previously called on soldiers to lay down their weapons and engage in dialogue with the government, while admitting that they might have some “legitimate frustrations.”

The detention of a president, who enjoyed support from France – Mali’s former colonial power – and its western allies has set off alarm bells for both the UN and the African Union.

The African Union’s head, Moussa Faki Mahamat, said he “strongly condemns the forced detention” of both Keita and Cisse and demanded their immediate release.

Meanwhile, the Economic Community of West African States has decided to close its member states’ borders with Mali, cut all financial flows and suspend Bamako from its decision-making bodies, while calling on the ECOWAS commission to impose sanctions on the “putschists and their partners and collaborators.”

The UN Secretary-General Antonio Guterres also called for “immediate restoration of constitutional order and rule of law in Mali,” his spokesman, Stephane Dujarric said in a statement. French and American envoys also rushed to join the chorus of critical voices, condemning the arrests “in the strongest terms” and expressing their opposition to “extra-constitutional changes.”

There are growing fears that the developments could plunge the already crisis-hit nation deeper into chaos at a time when it struggles to contain the Islamist extremists entrenched in its north, potentially opening up opportunities for a new offensive in the region. 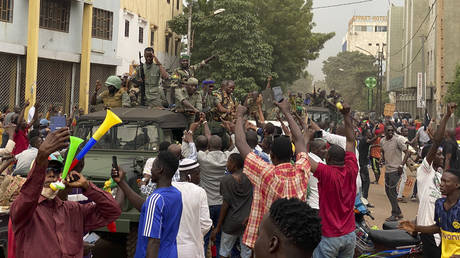