The North Korean military has showcased a new mobile intercontinental ballistic missile during Saturday’s military parade, one which experts say is larger than any previously demonstrated weapon of its type.

Four ICBMs of the new variety were carried by 11-axle erector-launcher vehicles, and they may be the new weapon system whose existence was hinted at by the North Korean government in December last year.

The projectiles appeared to be a larger version of the Hwasong-15, the ICBM which had its first test in November 2017. That test sparked security fears, as experts suggested its indicated range placed continental US within striking capability.

No additional details about the new missile’s capabilities were immediately offered by Pyongyang. Supreme Leader Kim Jong-un, who delivered a speech during the event, didn’t mention the US at all. He did, however, pledge to further build up the country’s deterrence capabilities.

However, the unveiling of the new weapon was not a complete surprise for observers. Days before the parade was conducted, South Korean media said this could happen, citing sources.

Pyongyang also demonstrated what appears to be submarine-launched ballistic missiles (SLMBs), labeled ‘Pukguksong-4A’, which were not used previously. North Korea tested a new type of SLMB, Pukguksong-3, in October 2019, demonstrating it can fly at least 450km.

A new air defense system and what appears to be a new version of a main battle tank were also shown for the first time during the military parade. 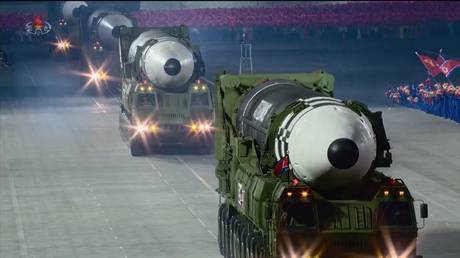