Russian President Vladimir Putin has proposed to hold an online summit featuring Iran, Germany and five UN Security Council permanent members. The meeting would focus on how to avoid conflict over the UN arms embargo on Tehran.

Discussions on the Iranian issue at the UNSC have become increasingly tense, the Russian president said on Friday in a statement released by the Kremlin.

A US-sponsored resolution that would have extended the embargo indefinitely was put before the Security Council on Thursday, but was rejected on Friday after opposition by veto-wielding Russia and China.

The @UN Security Council failed today to hold Iran accountable. It enabled the world’s top state sponsor of terrorism to buy and sell deadly weapons and ignored the demands of countries in the Middle East. America will continue to work to correct this mistake.

The arms embargo, which is due to expire in October, was agreed under a 2015 nuclear deal between Iran and the so-called P5+1 group, consisting of permanent UNSC members Russia, China, Britain, France, the US, and Germany. Known as the Joint Comprehensive Plan of Action (JCPOA), the deal would have prevented Tehran from developing nuclear weapons in return for sanctions relief.

However, the Trump administration unilaterally exited the deal in 2018, and has since reimposed all the sanctions suspended under it, as well as imposed additional ones.

Tensions between Washington and Tehran intensified on Thursday, when the US Central Command said that two Iranian military vessels and a helicopter had overtaken and boarded a Liberian-flagged oil tanker in the Strait of Hormuz, which provides the only sea passage from the Persian Gulf to the open ocean. An anonymous CENTCOM official told AP that Iran had seized the vessel for five hours.

On Friday, the US Department of Justice confirmed that the US has seized over a million barrels of Iranian fuel aboard four tankers headed for Venezuela, boasting of the largest-ever seizure of the sort and prompting accusations of “piracy” from Tehran.

Moscow, which remains fully committed to the Iran nuclear deal, proposed a renewed concept of security for the Persian Gulf region in 2019, Putin said. However, the situation has been escalating there while “unfounded accusations against Iran are being put forward,” he added.

Other nations should consider Russia’s offer carefully, the president said, adding that the alternative would be a further escalation of tensions and a growing risk of conflict.

Russian Foreign Minister Sergey Lavrov sent a letter to the UN Secretary General Antonio Guterres in June, noting that there are no legal or other grounds to discuss the prolongation of the arms embargo. The Russian top diplomat said that the current embargo under the UNSC Resolution 2231 was meant to be temporary. 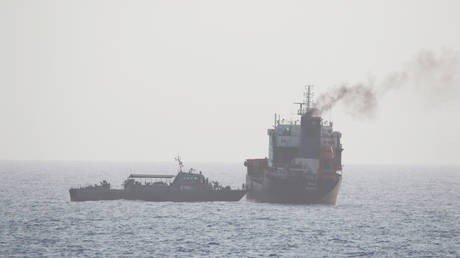