Serbian President Aleksandar Vucic has said the ‘terrorists’ fueling violence in Belgrade will be arrested and held accountable, after the fourth day of protests saw more teargas and clashes with riot police.

“I am proud of Serbia for enduring this,” Vucic said on Friday from Paris, where he was meeting with French and German leaders to discuss negotiations with the breakaway province of Kosovo. He denounced the violence and chaos as “pure terrorism.”

Among their grievances were the announced new lockdowns to halt the spread of Covid-19 and the alleged plot to recognize Kosovo, as Western powers have demanded for over a decade.

Brnabic called the protests “irresponsible behavior” and said that Serbia has recorded 386 new cases and 18 deaths on Friday.

After a long standoff, a phalanx of police fired teargas and moved to disperse the protesters.

Demonstrators fled down King Alexander Boulevard towards St. Mark’s church, and some were arrested along the way.

As they gathered outside the church and chanted “Serbia!” the police fired teargas again.

Gendarmerie in specially modified Hummvees joined the fully armored riot police. There was no sign of mounted officers that had been used earlier in the week to run down the demonstrators.

Clashes first broke out on Tuesday, after Vucic departed for France and a day after the government announced it would reimpose a draconian Covid-19 lockdown – a measure later abandoned due to the public backlash.

Thursday saw a change of tone as sympathizers of pro-Western NGOs staged sit-ins and shouted down anyone carrying a Serbian flag or chanting nationalist slogans. Nationalists have repeatedly rebuffed attempts by politicians and NGO activists to take over the protests, on multiple occasions chasing off opposition officials who tried to infiltrate.

Vucic has speculated about “all kinds of influence from foreign security services” behind the protests. On Friday, he told reporters about an incident with an “extreme right and extreme left” activists attacking each other with knives, before asking the police for help.

“They didn’t carry knives with the intent to trade World Cup cards, did they?” he quipped. 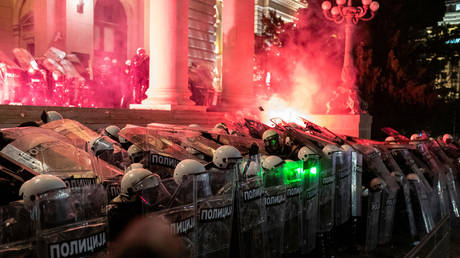