The Indian military has flatly rejected a media report claiming that Chinese troops deployed microwave weapons, making Indian soldiers “vomit” and flee in panic from the disputed border area in the Himalayas.

The claims about China using microwave weapons are “baseless” because “no such incident has taken place,” the Indian Army said, labeling the story from the UK newspaper The Times “fake news.”

Media articles on employment of microwave weapons in Eastern Ladakh are baseless. The news is FAKE. pic.twitter.com/Lf5AGuiCW0

On Tuesday, the Times cited a lecture by Jin Canrong, a professor of international relations at Renmin University of China in Beijing. He reportedly claimed that on August 29 Indian troops advanced against the Chinese soldiers stationed on the disputed border in the Himalayas but were repelled after the Chinese had “turned the mountain tops into a microwave oven.”

“In 15 minutes, those occupying the hilltops all began to vomit,” Jin Canrong was quoted as saying. “They couldn’t stand up, so they fled. This was how we retook the ground.”

Microwave weapons fire high-frequency electro-magnetic pulses or beams that cause a painful sensation by heating up the surface of the skin.

The Indian government previously accused Beijing of “provocative military movements” on the night of August 29, and said it took action to “thwart” the Chinese attempt to change the de facto border. A spokesperson for the Chinese government, Zhao Lijian, denied these claims, saying that Chinese troops have never crossed the borderline.

The countries engaged in a violent standoff in the disputed area in the Himalayas in June, during which 20 Indian soldiers were killed and dozens more injured. China admitted that there were casualties on both sides but fell short of disclosing its numbers. Following the bloody clash, both sides agreed on mutual de-escalation. 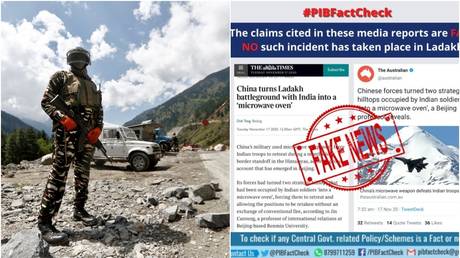