Anti-government demonstrations in Iraq have continued for a fourth consecutive day, as hundreds of protesters faced off with security forces while demanding an end to the targeting of activists by authorities and armed groups.

Riot police in the southern city of Nasiriyah used tear gas and fired live rounds on Monday while trying to break up the crowds, local media reported, and footage shared to social media showed people hurling rocks at a checkpoint and running away.

Crowds could also be seen filling the city’s central Haboubi Square on Monday. The site has been a focal point of the unrest since it was occupied by demonstrators on Friday, demanding the release of fellow protesters who were recently arrested.

Protests on Sunday escalated and led to a policeman in Nasiriyah being killed by a “bullet to the head,” a medic told AFP, while on Friday a lawyer and activist was reported to have died after a group broke into his house and gagged his mouth.

At least 18 protesters and 40 members of the security forces have reportedly been injured in the violence of the past few days.

The British Ambassador to Iraq, Stephen Hickey, said on Monday that he was “very concerned about the escalation of violence” in the city, while calling for “dialogue, restraint and accountability for the killing of civilians and members of the security forces.”

Protests in the Shia Muslim-dominated south of Iraq have continued despite the health measures imposed due to the pandemic, while other demonstrations have taken place in the regions of Babil, Basra, Diwaniyah and Wasit.

More than 500 protesters have been killed in anti-government demonstrations in Iraq since they erupted in October 2019.

As well as protesting about the government’s targeting of activists, demonstrators have voiced their anger over political corruption, unemployment and the state of public services in Iraq, as the country continues to battle a deep economic crisis. 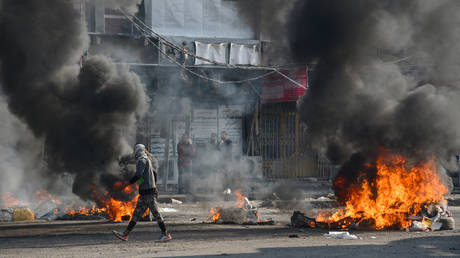