Anti-government sentiment shows no sign of quieting down in Belarus with tens of thousands attending a protest in the capital, Minsk on Sunday. Hours earlier, a pro-government rally was held in the city.

The demonstration is taking place exactly one week after the controversial presidential election in Belarus. The outcome, which gave incumbent President Alexander Lukashenko his sixth term, was rejected by the opposition, who accused the government of rigging the vote. A police crackdown launched against them angered the general public, with mass protests and walkouts held throughout the week.

Sunday’s protest in Minsk is focused around a memorial to the city’s fight against Nazi Germany, which is located near a war museum and that has a lot of space around it. Images from the scene show a large crowd flooding the area, chanting anti-government slogans. Some estimates say as many as 100,000 may be attending. 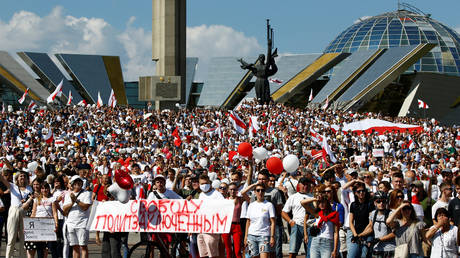 'We could be writing obituari...

‘I’m KNEELING for you,’ Lukashenko...