Footage on social media showed Greek protesters fleeing police as authorities fired tear gas into the crowd, after they gathered to mark the anniversary of the 1973 student revolt in defiance of a Covid-linked ban on rallies.

The clashes broke out in Athens after protesters broke through a blockade and began to demonstrate in an apparently socially distanced manner, according to videos shared online.

Police marched towards the crowd and used tear gas and water cannon to disperse protesters, who were forced to retreat to Karaiskaki Square.

In anticipation of the march recognizing the Athens Polytechnic uprising, which led to the toppling of the Greek military junta, the government issued a ban on rallies between November 16 and 18, due to the soaring number of Covid cases in the country. Thousands of police were deployed to Athens and the northern city of Thessaloniki to enforce the restrictions.

Left-wing politicians and opposition parties condemned the conservative government’s actions as “authoritarian.” However, a late court challenge claiming that the ban was unconstitutional failed.

Prime Minister Kyriakos Mitsotakis laid a wreath at the Athens Polytechnic on Tuesday and defended the protest ban: “Every important anniversary gains new meaning through the conditions in which it is celebrated.”

Greece is currently under a nationwide lockdown until November 30, as the country attempts to bring the viral outbreak under control. Since the start of the pandemic, Greece has experienced 74,205 cases and 1,106 deaths from coronavirus. The situation has been escalating in recent weeks, and on Sunday the country recorded its highest single-day increase in fatalities. 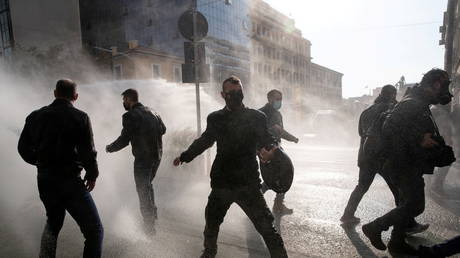