Public prosecutors in Peru have launched a preliminary investigation into former president Manuel Merino, the prime minister and interior minister, over deaths and disappearances during recent anti-government protests.

Interim leader Merino was sworn in as president last week after his predecessor Martin Vizcarra, a popular figure among Peruvians, was controversially ousted by parliament.

But Peru’s political crisis deepened on Sunday as Merino himself was forced to resign less than a week into his job, after two protesters died at demonstrations. A further nine people have been reported missing during the protests and over 100 were injured.

The inquiry regarding Merino and his officials is into the violence and alleged forced disappearances at protests, which would constitute human rights breaches, Peru’s Attorney General Zoraida Avalos said on Monday.

“My office has decided to initiate a preliminary investigation against Manuel Merino de Lama, [PM] Antero Flores-Araoz, and [Interior Minister] Gaston Rodriguez for the alleged crimes of abuse of authority, as well as intentional homicide” against two men who died at the protests, Avalos said.

I can assure you that these deaths will not remain unpunished.

On Sunday thousands of people across the country mourned the two men, aged 22 and 24, who died on Saturday after sustaining multiple gunshot wounds during clashes between police and protesters in Lima.

A UN mission is also heading to the South American country to investigate potential human-rights abuses committed during the marches, in which police used rubber bullets and tear gas. 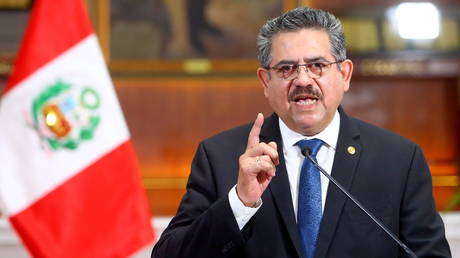 ‘Founding principles HAVE BEEN LOS...